The Linux kernel has always held a mystical place in my mind. It's the inner sanctum of computer magic which makes programs work. Somehow.

People with arcane knowledge of the Linux kernel often refer to "user space" programs, but I've never really been sure what they mean by that. Or of what actually makes up the "kernel", for that matter.

Ultimately, when I write a program which interacts with the file system, or communicates over a network, or somehow interacts with the outside world, I've never really known how these operations are actually executed by the computer/operating system/programming language. Magic!

If, like me, you also feel like a level one Linux user in dire need of experience points, then fear not! This blog post will try to give you a high-level summary of the following arcane topics:

Having introduced you to these concepts, I'll then try to illustrate how a program makes use of the services provided by the operating system. I'll demonstrate a couple of small applications, written in Go, which consume operating system services directly. This will hopefully take some of the mystery out of computers in the future. If you reach the end of this blog post, you gain one hundred Linux experience points!

There is a stack of services that underpin user-run processes in Linux. User-run processes (normally referred to as user space processes, see the user space section below) rely on services provided by the kernel. The kernel is a special part of the operating system, which handles a variety of low-level operations in a privileged running mode (see the section on kernel space below).

This is illustrated in the diagram below, which I borrowed from linux-kernel-labs.github.io:

This diagram shows how user space processes rely on the kernel for access to hardware, and how they access it via a system call (or syscall) interface. However, the kernel itself has more to it than just a syscall API for low-level operations. As well as facilitating this interface with user-run processes, the kernel contains a process scheduler, networking stack, virtual file system, and device drivers for hardware support, to name just a few. The diagram above is a bit of an over-simplification, and the following diagram (again borrowed from linux-kernel-labs.github.io) shows a more complete picture: 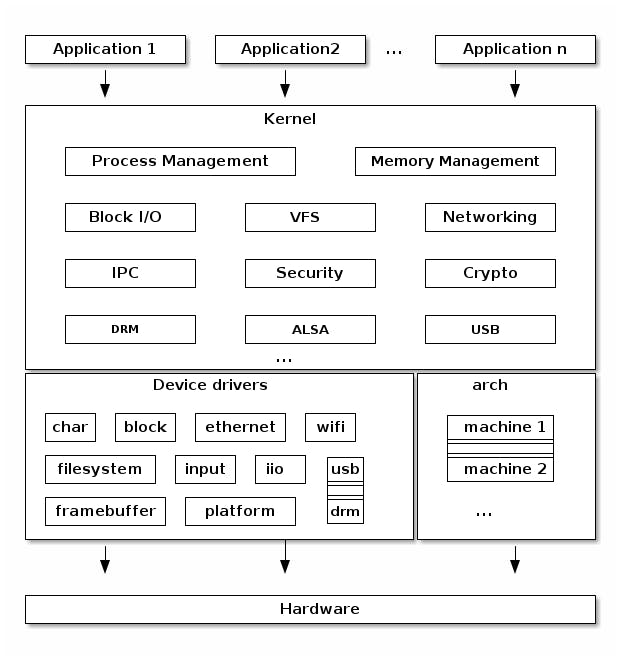 The remainder of this blog post will cover user and kernel space in more detail, discuss the syscall interface, and provide practical code examples of syscalls in practice.

A user space process is executed by a user in the operating system, rather than being part of the operating system itself. It might also be executed by an init system (e.g. systemd), but it isn't part of the kernel. User space is the area of memory that non-kernel applications run in. User space processes literally run in the user space part of memory. A user space process runs in user mode, which is the non-privileged execution mode that the process' instructions are executed with. User mode processes have to switch to kernel mode when they want to consume services provided by the kernel (e.g. disk I/O, network access). Switching to kernel mode involves triggering a syscall to be executed by the kernel. This mechanism is described in bit more detail below.

Kernel spaceis the area of system memory reserved for the kernel. It is where the kernel runs and executes kernel mode instructions.Kernel modeis the CPU execution mode of the kernel, which runs in a privileged, root-access mode. When a user space application requires the services provided by the kernel, it will signal the kernel to execute a syscall, and switch to kernel mode for the duration of the syscall execution.

Syscalls are functions in the kernel that provide services to a user space application. They are the API that the kernel exposes to user space programs, which allow a program to utilise the functionality the kernel offers. Examples include starting new processes, disk I/O, and networking.

Many syscalls are accompanied by small Linux programs which wrap them. For example, the chdir syscall for changing working directory can be invoked directly by running chdir in a shell. Other syscalls are designed to be used in concert with each other. There are a variety of syscalls for socket-based networking (e.g. socket, bind, listen, and accept), which combined offer a suite of socket-based functions for user space programs to utilise.

As mentioned above, syscalls are invoked via an interrupt or instruction executed by the user space process and the kernel mode execution. This system is normally wrapped by a library (e.g. glibc), which offers a slightly higher-level abstraction for programs in the form of functions that can be called. Furthermore, most programming languages come with much higher-level abstractions that allow you to deal with logical operations, rather than physical syscalls.

Nonetheless, breaking down some simple operations in their syscall components can prove interesting. The remainder of this blog post will illustrate a couple of simple examples using Golang, and demonstrate how the syscalls themselves can be observed by a user.

The use of these syscalls can be illustrated in the following Golang example:

This program opens a file called test.txt, writes the string hello world to it, and then closes the file descriptor. Normally these operations are abstracted by a higher-level API, but the use of these syscalls directly illustrates how writing to a file is a achieved at the user space/kernel space boundary.

The use of the kernel by this program can be further illustrated using a diagnostic tool called strace. Syscalls can be observed directly using strace, either for a process you want to execute, or an already running process. It allows the syscalls used by a program to be observed directly, which can be very useful for understanding what operations the program is performing that rely on system resources.

If you compiled the example above and ran it with strace, you would see something like this:

This example demonstrates the use of the syscalls for file access from an external point of view, and the same technique could be used on any program to gain an insight into the way it interacts with the kernel.

The Go example below illustrates all of these steps:

Once again, the use of syscalls by this program can be observed with strace:

This example is slightly more complicated than the file-writing example, because we need to open a TCP connection to the program and send data to it. netcat is a convenient tool to do this, and in this example we just send the text "hello world", and then close the connection with a keyboard interrupt.

I hope this blog post has demystified some of the workings of the Linux kernel, and the relationship it has with user-run programs. The top takeaways for me are: 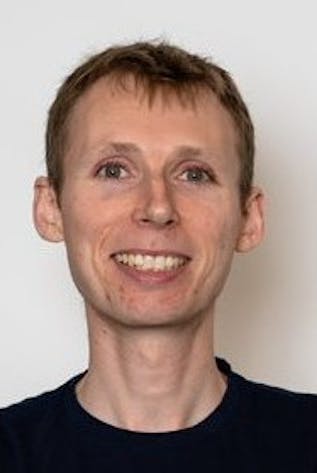 I have a rough understanding of PKI certificates, how they work, and what TLS is in general. However, I've always struggled to understand the details, particularly from the point of view of an operator. How do I check if a certificate is valid? How do I check who issued it? What does it even mean to "issue" a certificate? To make matters worse, I'm frequently confounded by the variety of different file types used for certificates. Is it a pem, or a crt, or a pub? Speaking of pub, what's the difference between the TLS certificate my server uses to encrypt traffic, and the certificates I use for SSH authentication? In this post, I will answer these questions and then walk though a practical example of using certificates for TLS via a local nginx proxy, modeling the client/server TLS you often see on the web.

Leah Cohen from School of SOS joins us to share her insights into how tech leaders can support diversity in tech. She tells us about what diversity in tech is and why we should care about it. Then, she explains two key solutions to improving diversity: target the next generation and support transitioning into careers in tech.

Creating persistence is one of the biggest challenges during Red Team engagements, and doing it in a stealthy, yet reliable way is even more difficult. One old technique on Unix based systems is library injection through environment variables. In this post, we will look at whether this is still possible after macOS 10.14 (Mojave).